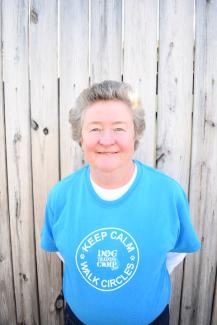 After working 30 plus years in banking, Maureen decided it was time to pursue her passion for the training and development of dogs so other dogs and their owners could enjoy the same relationship that she has with her dogs.

Maureen fostered many shepherds for GSRA.  Her GSD (German Shepherd Dog) Patty did not like adult fosters coming into the pack, so she fostered pups, especially young pups (6 weeks - 6 months). Maureen concentrated on basic puppy manners: house-training, walking on leash, sit & socialization with her three female GSDs. This set many young puppies up to succeed as they went to their new homes. Maureen adopted Sky from GSRA in 2016, when she was about 1 year old.  She gets along well with other dogs after an appropriate introduction. Sky likes going for runs and playing in the backyard; she especially likes playing fetch and swimming in the pool. In 2019, Maureen adopted a Shepherd mix, Shadow, from the SPCA.

Maureen is located in Fuquay-Varina. Her large backyard is fenced in and has an in-ground pool. Dogs here for training are allowed in the pool if they are so inclined. Her house is on a quiet cul de sac, so she is able to work with dogs throughout the house, front yard, driveway and street. When she’s not playing with Sky and other dogs, Maureen enjoys many sports, both participating in and watching. She plays golf, swims and recently took up pickleball. She is an avid Notre Dame fan: football, women's and men's basketball!

Maureen is especially good at: