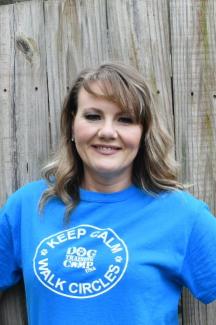 Angie compares herself to Snow White. She has always had a natural attraction to animals and they always seemed to follow her. Her mom says that every stray dog and cat always seemed to find their way to their home, and Angie welcomed them with open arms. Angie graduated from college and went into a different industry but always gravitated to something that involved animals. She had a friend who was fostering and became involved in that. It was something that she truly loved. It was a way to save a life, and give a dog another chance at a wonderful life. Throughout several years of working with dogs, helping at animal shelters, and boarding, training seemed like a natural progression and fulfilled a dream to become a dog trainer. In researching a path to dog training, Angie was introduced to Dog Training Camp USA.

In 2010, Angie started fostering puppies for Southeast German Shepherd Rescue. She eventually worked up to handling dogs with medical conditions too. In the years with the rescue, she learned to work with animals that had behavioral issues, and that soon became a goal to help rescue, rehabilitate, and find homes for shepherds. In addition, Angie learned how to perform behavioral assessments on dogs to determine temperament and find a path for improvement through training. Angie has also worked with dogs in shelters as well as boarding facilities and has a small pet sitting company.

Angie lives in Raleigh on almost 3/4 of an acre with a 6' fence surrounding the home.  She has lots of open space to work with dogs inside the home as well as outside. She has a 12 yr old son who has been around dogs all his life. He is patient, kind and has learned proper ways of being introduced to dogs. He has been an integral part of helping with foster dogs, helping them to learn to be around children.  He has a natural connection with dogs, an understanding of their behaviors. He also doesn't mind running, throwing the ball, and giving doggy kisses! Angie has 2 dogs and a cat at home.

Angie is also a real estate agent but her first love is animals. When she does have free time, she enjoys gardening, cooking and traveling to the mountains. She loves to volunteer time at animal shelters and continues to work with other rescue groups, in addition to Southeast German Shepherd Rescue. She loves to watch makeup tutorials and funny animal videos while she cooks and cleans!

Angie is especially good at: 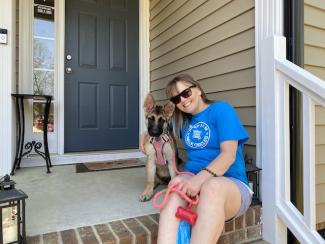